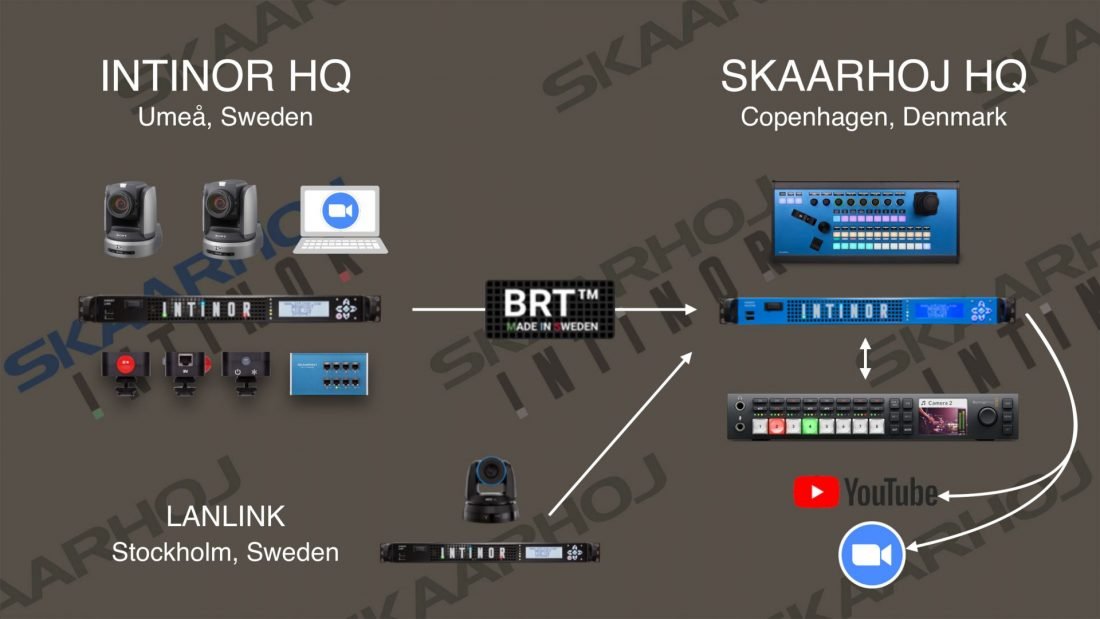 We joined forces with Kasper Skårhøj of Skaarhoj to talk about remote production using the complimentary tools from each company that together form a complete workflow solution. The main aim of this series of webinars was to demonstrate how companies can save money and time by setting up a remote production workflow and thereby significantly reducing the need for travel for production personnel. There are many benefits to a remote workflow and, recently, it has been proving to be an essential tool to ensure continuity.

The basis of REMI is that you have one or multiple cameras from the remote location streaming to an MCR or other production location to output using SDI or NDI into a production system where you can add graphics, commentary replays, or whatever is required, before broadcast or transcoding to different distributors or distribution to web TV, etc.

To demonstrate this in action and the advantages of using the tools from both Intinor and Skaarhoj, the presentation itself was a remote production between Skaarhoj’s base in Copenhagen, Denmark and Intinor’s base in Umea, Sweden plus another location in Stockholm, Sweden. Multiple PTZ cameras were used at each location, working over Intinor’s VPN solution and controlled by Kasper from Copenhagen using Skaarhoj’s universal broadcast controllers.

Daniel explained how in Umea and Stockholm, Intinor’s encoders were sending the video streams. In Umea they had two PTZ optics cameras with Tally lights as well as a background camera to show his location behind the scenes. In Stockholm, at the offices of partner company LanLink, they had a NewTek camera in place. All of these cameras were connected via VPN to Copenhagen where Kasper had a Direkt router.

Kasper was able to zoom in on a remote camera in Skaarhoj’s server room at this point and actually show the Direkt router in situ which is what was receiving all the video streams coming in from Sweden to Denmark. This was a tower system with internal fans that Daniel explained later was originally developed to meet the needs of an esport producer who wanted a quiet system to sit in his living room whereas the Direkt Router is usually sold as a rack system, as shown in the slides in Daniel’s presentation.

Watch the video in full below and see the Remote Production set-up in action:

Kasper was able to switch between the remotely controlled cameras both on Daniel in Umea and also at Lanlink in Stockholm. All of these feeds were routed into an ATEM switcher going into Kasper’s laptop and broadcast as the webinar, merging in his audio feed as well.

Daniel’s presentation showed the key benefits of Intinor’s encoders and its BRT™ (Bifrost Reliable Transport) internet transport protocol as well as explaining the interoperability of Intinor’s solution, known as the Swedish Army Knife for IP-stream orchestration.